Ocean Rebellion in Cornwall calls for a ban on bottom trawling

An environmental group calls for a ban on bottom trawling, showing the effect it has on “sirens”.

On Wednesday, the crew of Penryn’s Ocean Rebellion claimed to have found gossip of mermaids entangled in discarded fishing litter.

They say the pod ran aground with a trawler on Sailors Creek, upstream from the Penryn River.

The group claims that the mythical creatures are being killed by the effects of ghost fishing gear and damage from industrial fishing, damage that destroys all of the local coastal ecosystems they inhabit.

Ocean Rebellion is calling on the public to support a ban on bottom trawling around the UK coast.

A trawler also ran aground nearby in the creek.

The action was a collaboration between Ocean Rebellion and local professionals, all nets and plastic used were collected from Cornish beaches by Clean Ocean Sailing, based in Gweek.

Together, all of these groups are trying to work towards a healthier ocean by tackling the issues of overfishing, marine plastic and blue carbon.

Last week’s action focuses specifically on the damage done to our ocean and the local fishing fleet by the deeply unsustainable fishing method called bottom trawling.

Bottom trawling is a fishing method that destroys fish populations, releases blue carbon (the CO2 captured in the seabed) and plows marine habitats.

Ocean Rebellion says it has also been contacted by divers and environmentalists on the Helford River, reporting that bottom trawlers were illegally trawling the oyster beds at night, decimating the seabed.

Ocean Rebellion member Roc Sandford said: “Mankind has declared war on fish and we are winning.

“The ocean is so depleted that the small fishing communities are on the brink of survival and the areas of abundance are now empty. 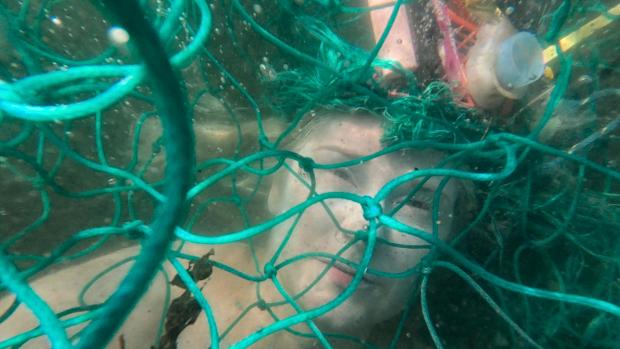 Ocean Rebellion is calling on the public to support a ban on bottom trawling around the UK coast.

“It is obvious to ban bottom trawling for reasons of both climate and nature degradation.

Suzanne Stallard, also of Ocean Rebellion, said: “The ocean can recover quickly, but only if we stop this destructive practice now, in a few years these precious ecosystems will regenerate and fish populations will stabilize.

“We just have to give life a chance.”

Scotwind – developing Scotland as a world ...